I made a bicycle repair stand the other day. I got the idea from a reader submission in Bicycle Times magazine. If you get the magazine you can see the submission. If you don't know what a magazine is, congratulations you are a useless millennial.

The reader used a workmate stand to make his own version of a Euro-style workstand that's often seen outside team buses at the Tour de France.

I figured I would make my own using a Burro Brand sawhorse because donkeys make everything better.

The only other thing I bought for my workstand was a 100mm skewer. The rest of the project was built using crap I found in the garage and some nuts that were in my sock drawer. Total investment was about $25 U.S.A. fun dollars. 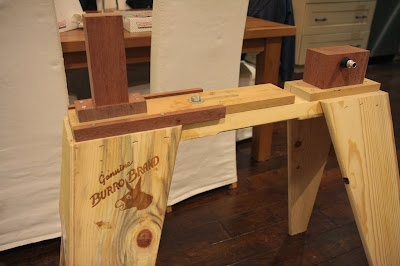 Burro Brand claims that this bad boy is rated for up to 2000 lbs or 1.3 Kim Kardashians. It should be able to support any of my bikes. 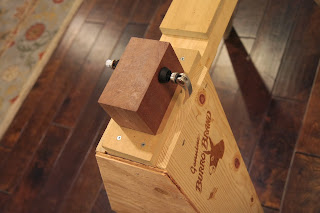 The front and rear supports are made with blocks of wood glued together to get the necessary width. However, I still added about 3 washers to each side of the front skewer. The black things are little plastic feet that came with some Ikea furniture that I forgot to install. I drilled some holes in them and put them through the skewer like a boss. I hope I don't need them later... 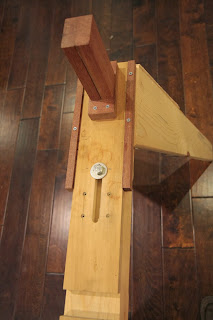 The rear support was a bit more involved. I used a 1/2 inch bolt to secure a longer board near the center of the saw horse. The slot allows the board to slide back and fourth about 5 inches to support bikes with different wheelbases. If I need more adjustment in either direction I have plenty of room to extend the slot. The strips on either side keep the board in alignment with the sawhorse. 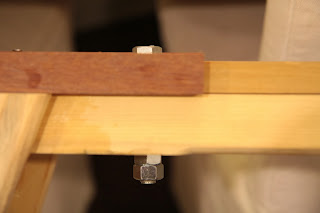 This is a closeup of my nuts. I used two to avoid the need for over-tightening the assembly. Other methods may also work well but this keeps the board snug enough, but not too snug to permit single handed adjustments. 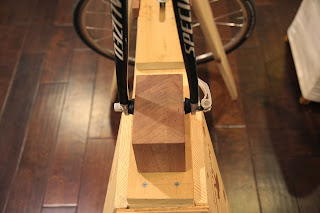 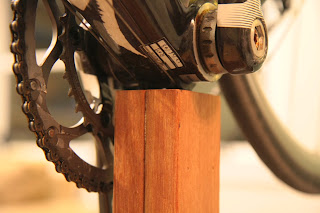 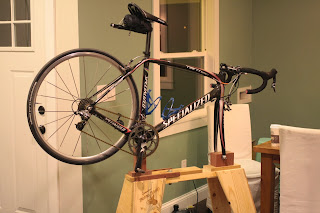 I built this thing on my spare time over the course of 2 days and so can you! I could have sanded it and made the bottom bracket support prettier by putting a little curve in it but I'm too lazy. I'll probably just glue a piece of a door mat on the top to avoid damaging cable guides. I'll be using this to wrench on my Disc Trucker project. I'll appreciate having the front fork clamped down when I do things like wrap handlebars or adjust brakes and shifters. Remember, it's righty-tighty / lefty-loosey.


The mail man stopped by to deliver a box. I was incredibly disappointed to learn that some jerk ate all my crackers and replaced them with these bland-tasting shifters. I guess I'll just put them on my new bike. Apparently the Canadian guy that sold me these on eBay didn't have any standard corrugated boxes to mail these $200 components in. That's the last time I buy anything from RobFord69. 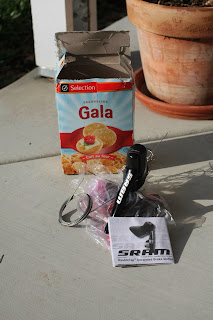 Later on that day the UPS man stopped and did this dance on my front porch. He looked exactly like this guy except he was Hispanic so his dance had a little bit more of a Salsa groove to it.

He then gave me a box filled with more bike stuff. 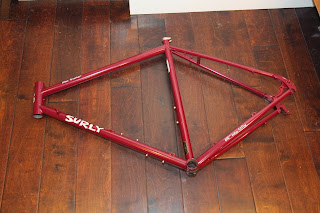 This is the frame that I'll be using for my touring bike. It's a 56 cm sized Surly Disc Trucker for 700c wheels. I could have opted for the 26 inch wheel version but I chose 700c because I prefer the stance and handling of a road bike. People will argue that a 26 inch wheel is more well-suited for touring internationally since finding replacement parts is much easier, but that doesn't concern me since my illegal immigrant status prevents me from leaving the USA if I have any hope of returning.

The frame is made in Taiwan, the capital of all bicycle stuff and the quality is excellent. Clean welds, mounting options for pannier racks, fenders, and even a full size bike pump fits underneath the top-tube. This frame isn't light but that's not important. The important thing is that it's well-made and well-designed. Surly didn't skimp on providing everything that a touring cyclist might need on a frame. This includes spare spoke holders. The picture has the frame upside down but that's the seatstay you're looking at with the the spare spoke-holders welded to it. 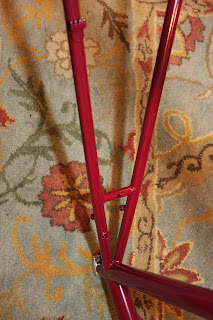 It might be more sporty than elegant, and it's not nearly as good looking as a Rivendell frame but it can be had for about $470 online for the bare frame and fork and it's an excellent bargain. I love Rivendell's frames and I sometimes dream that I'm riding a Rivendell through Rivendell with Frodo and Legolas and maybe Gimli when he's in a good mood. Unfortunately I don't have the money to spend on one of their beautifully lugged bicycles so this will have to do. To be honest, I'm not really missing out on much, although the Rivendell guys will probably disagree. Either way, I don't need any sour grapes.

For braking I'm going to use TRP's Hy/Rd cable actuated - hydraulic powered disc brake calipers with 160mm rotors. I've tested the fit of the calipers on the bike and they're perfectly suited since they allow plenty of clearance for a pannier rack and fender-stays on both the front and the back of the bike. My only complaint is the stupid sounding name. I'll provide updates on the brakes once the build is complete and I've had a chance to try them out. If you never hear back from me about the brakes it's because I've fallen into a steep ravine due to brake failure and I'll likely never be found.

The drivetrain will be comprised of SRAM Apex components with a 46/36 crank up front and a 11/32 cassette on the rear wheel. I initially felt that this would be too low and too wide but then I remembered that this is a touring bike and low gearing and wide gaps between ratios isn't a bad thing, it's a necessity. I've been using SRAM Force on my road bike for over 3 years without incident and this will probably work well even under the same amount if negligence. I refuse to use Shimano since everyone knows it's the Toyota of bike components. They're very reliable but my hands like the feeling of SRAM's hoods much more, so Shimano is OUT.

I'll follow up with updates on the build and provide more pictures but I can't do that until I get the bike back from the shop. I dropped it off to have the headset installed because I don't have a headset cup press and I would rather have the professionals at Richard's Cyclery, Garden Grove, California do their magic. I'll take the reins back and get everything else squared away myself with the exception of the wheels. Until then I leave you all to carry on.

Posted by turkeysandwich at 8:53 PM No comments:


I've always enjoyed cycling. About four years ago I made the leap from a casual mountain biking cyclist to the dorkdom of being a total roadie. I even had a phase where I thought if I trained really, really hard I could  win a local crit. I never won and I also never finished in the main bunch so I did what any competitive young person would do. I gave up.

Firstly, I've got nothing against racing. In fact I might race again one day if I think it might be fun. But that's just it. So far I haven't had much fun racing because I always get dropped. There, I said it.

Why have I lost contact with the main pack? Because I'm slow.

Why am I slow?  Because I have other things to do besides train like crazy for races so that I don't get dropped.

My work schedule is inconsistent and sporadic. If I don't work then I lose money, and that's worse than having to deal with getting dropped during a race. And because I can't train consistently for races there's no point in trying to race when I know I'll be unprepared.


Now some might think that riding around on a bike with panniers and saddlebags makes you look like a hippie or a homeless person. They might be right because I really don't know what hippies looked like (I was born in the 80's).  But what's even sillier is when you set off for a ride and it's overcast and freezing. Later as the sun pops out you realize it's getting really hot and wearing a jacket is stupid. You try to stuff it in your jersey pocket but it's too big. So you end up stuffing it inside the back of your bib shorts and sweating all the way down to your butt crack because you refuse to tie anything around your waist.

You can avoid all this by just riding a bike with a simple trunk bag mounted on a rear cargo rack. Just stuff the jacket in the bag and you're set.  Here's one that Rivendell sells:


Sure it's kind of heavy to add a rear rack and a bag to you're bike. But face it, you're fat. By pro-cyclist standards everyone's fat. You see Alberto Contador? Yeah, he's not fat but you are, get over it. So if you're gut weighs 12 extra pounds that bag and rack is probably 5 pounds max. Lose the gut and you're already ahead. Good job, fat ass. Hell, now that you have that bag you can probably carry stuff to make longer rides more comfortable and keep that 12 pound gut from coming back. Fantastic!

So do you see the appeal of a touring bike now? Even if you're not hauling a sleeping bag and tons of extra gear you can always carry something extra to add convenience to a ride across town or a ride across the continent of Asia. So there.  I'm gonna build a touring bike that's really cool.  And you're gonna watch.

Posted by turkeysandwich at 6:17 PM No comments: